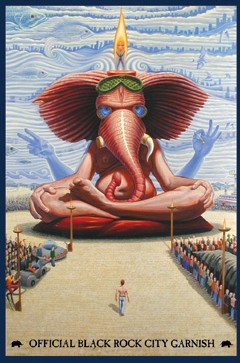 As you may know, a very long time ago, the barren playa where Black Rock City now stands was once a lush and thriving lakebed. Lake Lahontan was under the protection of the Kingdom of the Sea, and my Father, Poseidon, loved it dearly. He used to spend his summers there. But then one day the Burning Man came and dried up Lake Lahontan. The animals moved away, the plants withered and died, and the ground became cracked and brittle.

It has taken a millennia, but I am coming to Black Rock City to destroy the Burning Man, avenge my father’s loss, and reclaim the Playa for the Kingdom of the Sea. I have amassed a small army of fishes, devils, monkeys, and Gods to march on the Man’s Temple and burn it to the ground.

We are bringing thousands of gallons of water with us to aid in the attainment of our ultimate goal; the complete Rehydration of the Playa. We will begin our assault Wednesday Night at Sunset from our Head Quarters in the Woonami Village. We will then march along the esplanade, conquer Center Camp, and group at the cauldron to rally more supporters.

Thursday Night at Sunset we begin at the Cauldron and proceed up the processional to the Temple of Honor. There we will perform our preparatory rituals and receive our Blessings from the Goddess.

Friday Night at Sunset, we will gather at the Cauldron, march to the Man, and threaten him. This is his final warning. If he does not pull out after Friday night’s demonstration, then Saturday, at nightfall, we will destroy him.

I have formed alliances with the following Deities, and we have all agreed to March against the Man and burn him down. Together we shall be known as… . . .

The March of the Gods.

- Athena, Greek Goddess of Art, Wisdom, Justice, and War. Athena was very close to my Father. In the old days, they used to hang out at the Acropolis together. She felt his loss very deeply and she is coming to Black Rock City, stilted and armed with Flaming Poi, to serve the Man a fistfull of divine Justice.

- Starchild, Native Spirit Goddess. She will come to us Wednesday night in unearthly form. Thursday she will meld with the mighty unicorn, and Friday she will manifest herself as a human, adorned with a flaming headdress, and ablaze in all her tribal glory. She comes stilted with Flaming Poi and Fire Fingers.

- Munkus the Crusher, King of Apes. He is marching to avenge the displacement of his simian brothers from the foresty banks of Black Rock Lake. He wields Poi and a Flaming Staff.

- Loki, the Trickster. His skills with Poi and Flaming Rope are legendary. It’s true he is a mischievous and unpredictable deity, but I trust his instincts, as well as his innate talent for finding fun in the destruction of a God.

- Pan, Lord of Goats and Protector of Shepherds. He wields Flaming Nunchucks. When asked what his motivation was in marching against the Man, Pan replied “What day is it? Saturday? Hell, I’ve got nothing better going on. Let’s burn his ass!”

- Elijah, God of Elements. Wednesday he is Air, Thursday he is Earth, Friday he is Water, and Saturday he is Fire. He is coming to Black Rock City armed with Flaming Poi, Staffs, and Machetes.

- FireNinja, Master of the Flaming Martial Arts. Little is known about this renegade assassin. Some say he has a personal vendetta against the Man due to unpaid debts for past services rendered. He comes armed with Burning Whips, Swords, and Staffs.

- Lucifer, Lord of the Underworld. He claims that the Burning Man has been stealing his fire. He also says that recently several of his major Demons have left Hell and moved to Black Rock City. He comes wielding a Flaming Pitch Fork, Sword, Whip, and Staff.

- Nasu Pestihl, God of the Persian Underworld. Nasu travels in conjunction with Lucifer, and he plans to drag the Man’s spirit back down into the Underworld with him where it belongs. He is coming to Black Rock City armed with Flaming Poi and a Fire Whip.

- Bast, Goddess of the Cats. She represents the interests of all felines, from the lowest domestic tabby, to the mighty Lion. She comes armed with Flaming Poi and Fire Fans.

- Kali, Mother Goddess of Dissolution and Destruction. The Man betrayed her heart when he took a hallucinogenic DPW worker as his lover in 2002. She is coming to Black Rock City armed with Fire Fans and Swords to unleash her wrath and regain her lost honor.

- Inanna, Sumerian Goddess of Love, Fertility, and War. Inanna has a symbiotic relationship with the natural world. When the forest around Black Rock Lake died, Inanna’s soul died with it. She is coming to Black Rock City armed with Fire Fans to take down the Man, restore life to the Black Rock Forest, and resurrect her lost soul.

- Utnapishtim, Wise King and High Priest of Shurrupak. Many say that Utnapishtim, like Noah, is the immortal sole survivor of a Great Flood. But I have heard rumors that the flood was his doing in the first place, and that he is coming to Black Rock City to do it again. Just as Prometheus brought the spark, so Utnapishtim brought the dew. He travels armed with Flaming Poi.

- Mercury, God of Merchants, Trade, and Profit. In recent years, Mercury has developed a rather lucrative career as a real estate broker. He is coming to Black Rock City armed with Flaming Clubs to destroy the Man and stake his claim on the parcels of land directly surrounding the Playa. Once the Lake has been restored, the market value on these parcels will increase dramatically, and he will sell them off as waterfront property at a significant profit.

- Apollo, God of Music. Apollo is marching for the thrill of battle and the spoils of victory. He will weave our story into a great song that the people can sing for generations to come. He wields Flaming Poi, Swords, Whips, Claws, and Flags.

- Pecos Bill, Spirit of the American West. Pecos Bill claims that the Burning Man is horning in on his territory. When asked to elaborate on this claim, Bill said “Goddamn it, Burning Man! I’m the one that dug the Rio Grande! Now git the hell off mah land, or I’m gonna challenge you to a showdown!!” Bill is coming to Black Rock City armed with Flaming Poi, Double Staffs, and a ten gallon hat.

- Hippocampus Rex, Greek Lord of the Sea Creatures. Hippocampus will be in charge of our group’s Fire Safety. He has been swimming with my family for generations, and there is no one I trust more with the well being of our team.

- Luna, the Moon Goddess, will descend from the sky and march alongside us. It’s the New Moon and her night sky will be full of stars.

- Scorpio, Tribal Goddess, will march with us too.

- Oshun, the Afro-Cuban Goddess of Water.

- Nemesis Adrasteia, Goddess of Divine Justice and Vengeance. Nemesis will carry the scales and hold the Man accountable for his crimes. He will pay, no one can escape her.

- Eros, the God of Love. Eros has agreed to stay behind and watch over the Sea World in our absence.

Ganesh, Hindu God of Prosperity, has honored us with his divine protection. He’s also provided us with Propaganda to spread throughout the city during these marches in support of our cause. We will be distributing educational stickers and collectable memorablia in an attempt to enlist vehicles, and rally more supporters.

Warrants against the Man are being issued by many of the Deities listed above, and Wanted Posters will be hung in all the major theme camps calling for the Man’s immediate execution.

I sincerely hope that you will support us in this mission. Your blessing means more to us than you will ever know.

Thank you for your time.

King of the Seven Seas