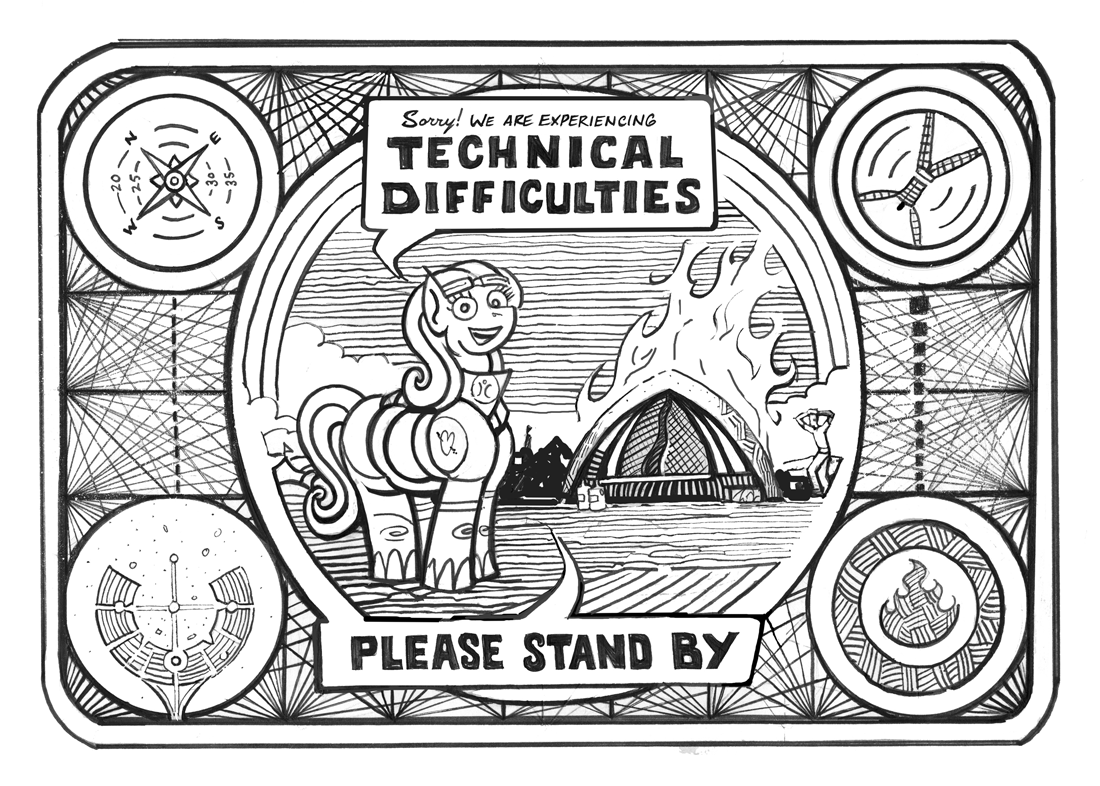 Apologies for the disruption of your regularly scheduled web comic updates, but we are experiencing some technical difficulties here at DRINK WATER headquarters.  The scanner that I usually use to scan the drawings is locked up at work for the foreseeable future. There are new pages in process, but it’ll be awhile until I’m able to scan them in and finish ‘em properly. Stay tuned to our Facebook and Instagram feeds for a sneak preview of what’s to come. I’ll post some cell phone shots of the latest pages to tide you over until production starts again.

In the meantime, Black Rock City has been cancelled for this year, so citizens around the world will be burning virtually in 2020. Might take some getting used to, but BRC has been living virtually in the pages of DRINK WATER since way back in 2013. Take a trip down memory lane and start the journey again from the beginning, just click on each comic to progress to the next. Mix up a cocktail, rub some dust in your face, and don’t forget to hydrate. It will be just like being home again!

Stay safe out there everyone!
And stay tuned, there’s more to come! 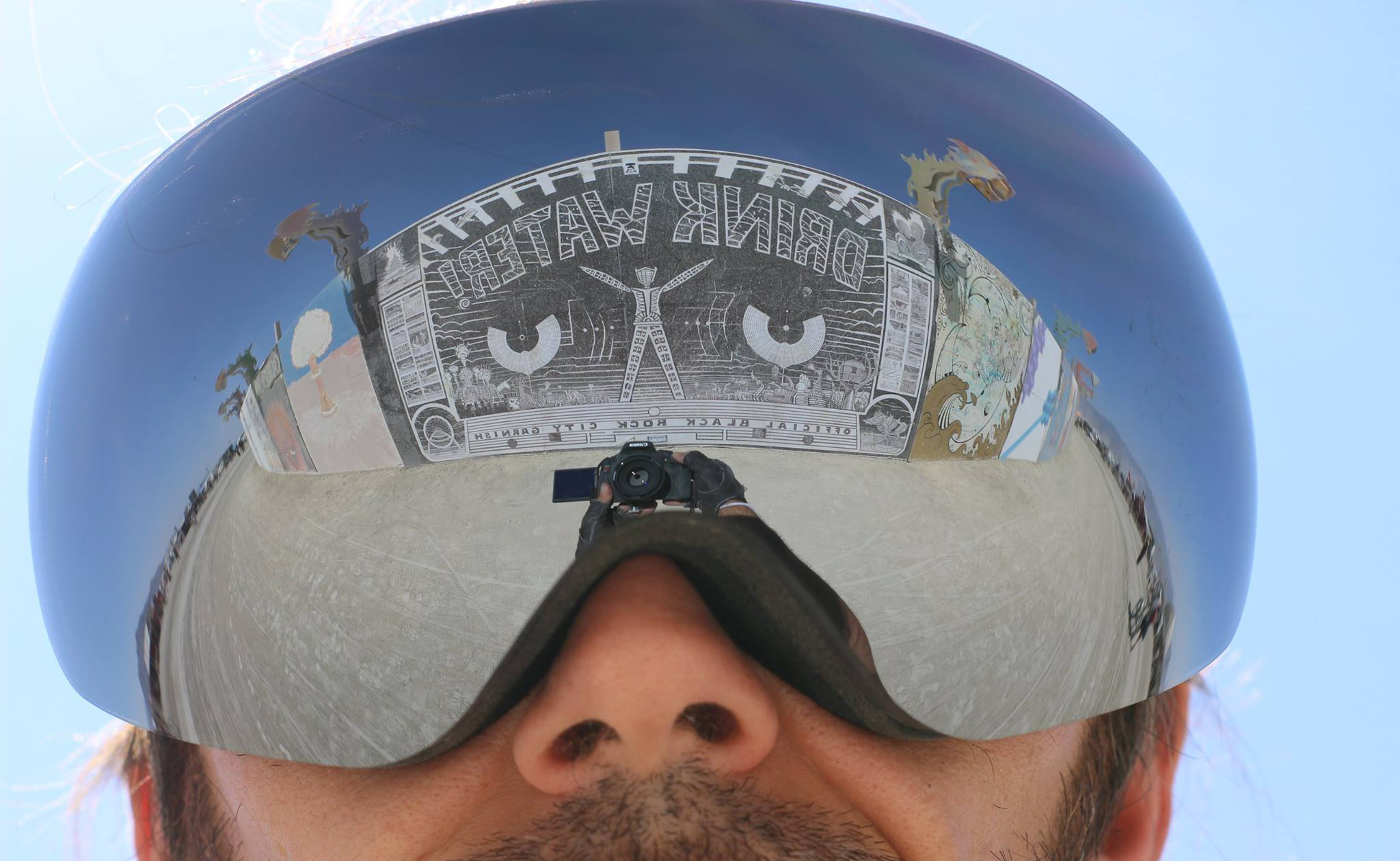 Drink Water! A public service announcement brought to you by Kamp Suckie Fuckaye @ Burning Man 2019. This mural measured 9×40 feet and was located at 7:30 & Esplanade. Thanks to Alicia Talia for the video!

YAR HAR!! In honor of ‘talk like a pirate day’, it is my great pleasure to announce the release of the debut album and video from Neptune’s brand new undersea heavy metal band, CHUM! Avast ye Scallywags!!!! 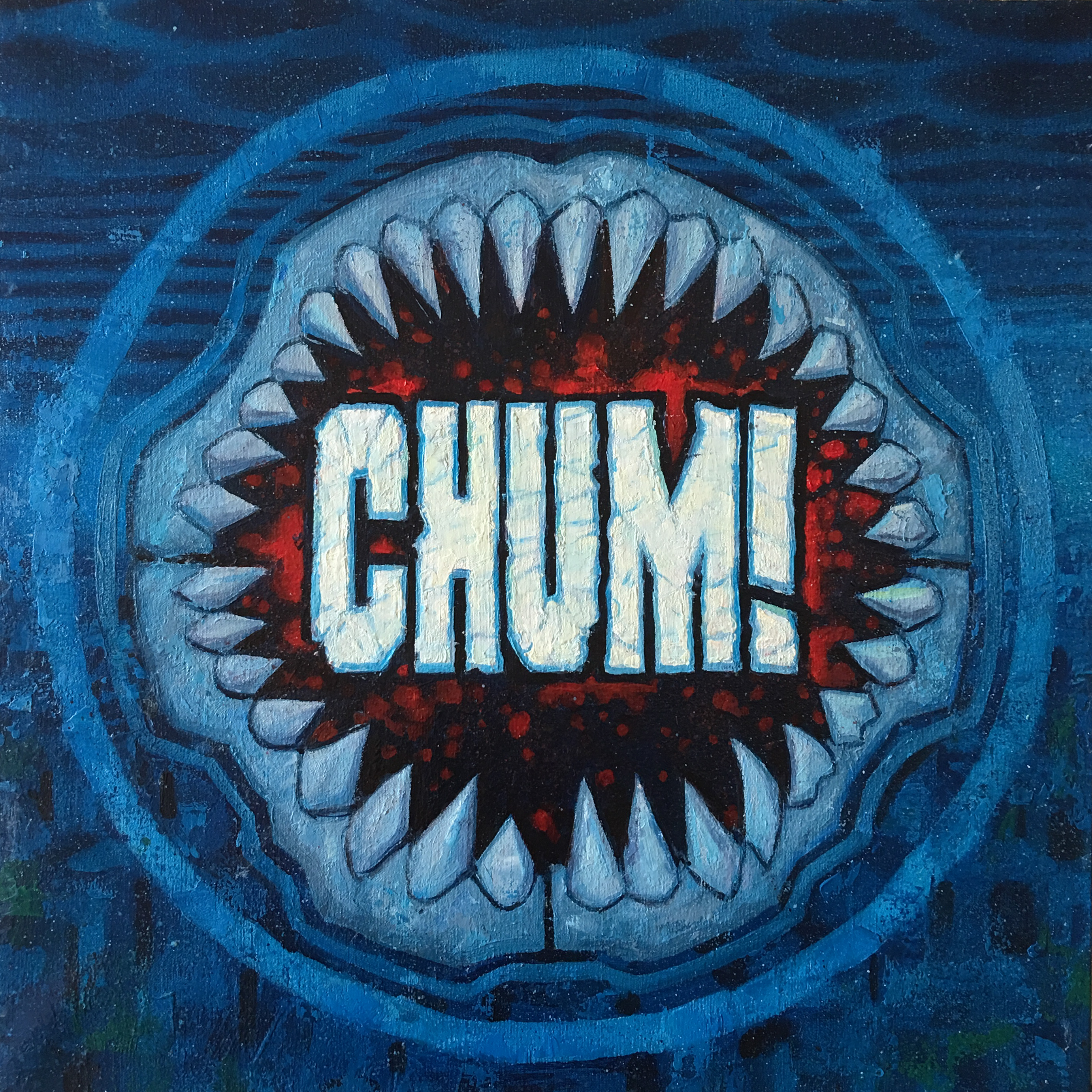 CHUM! is an undersea heavy metal project helmed by Lee Eschliman and DC Wilson. The band consists of a diverse collective of deep-sea creatures hell-bent on mining only the heaviest, most chunk-worthy riffs from the darkest depths of the undersea world. These savage ocean predators come together in a feeding frenzy of blood-thirsty chaos, channeling their primal hunger and gruesome savagery into a symphonic kaleidoscope of fish guts and cold-blooded brutality.

From the cold, forgotten depths of the deepest, darkest oceanic trenches, CHUM! rises like an ancient leviathan calling to all undersea predators scattered across the seven seas. These massive beasts rise into the light, following the primal undersea rhythm which flows freely like blood on the aquatic currents of the world.

15% of all proceeds of the album will be donated to Oceana International, for protection of the world’s oceans and marine environments.

by Neptune Zebracorn on September 8, 2019 at 4:24 pm
Posted In: Uncategorized

Really nice work. I’m sorry to have missed seeing it in person, but honored to be included thematically. Congrats to the entire CampFire Cove Crew on a successful playa project! These photos almost make me feel like I was there (except maybe a little less dusty). 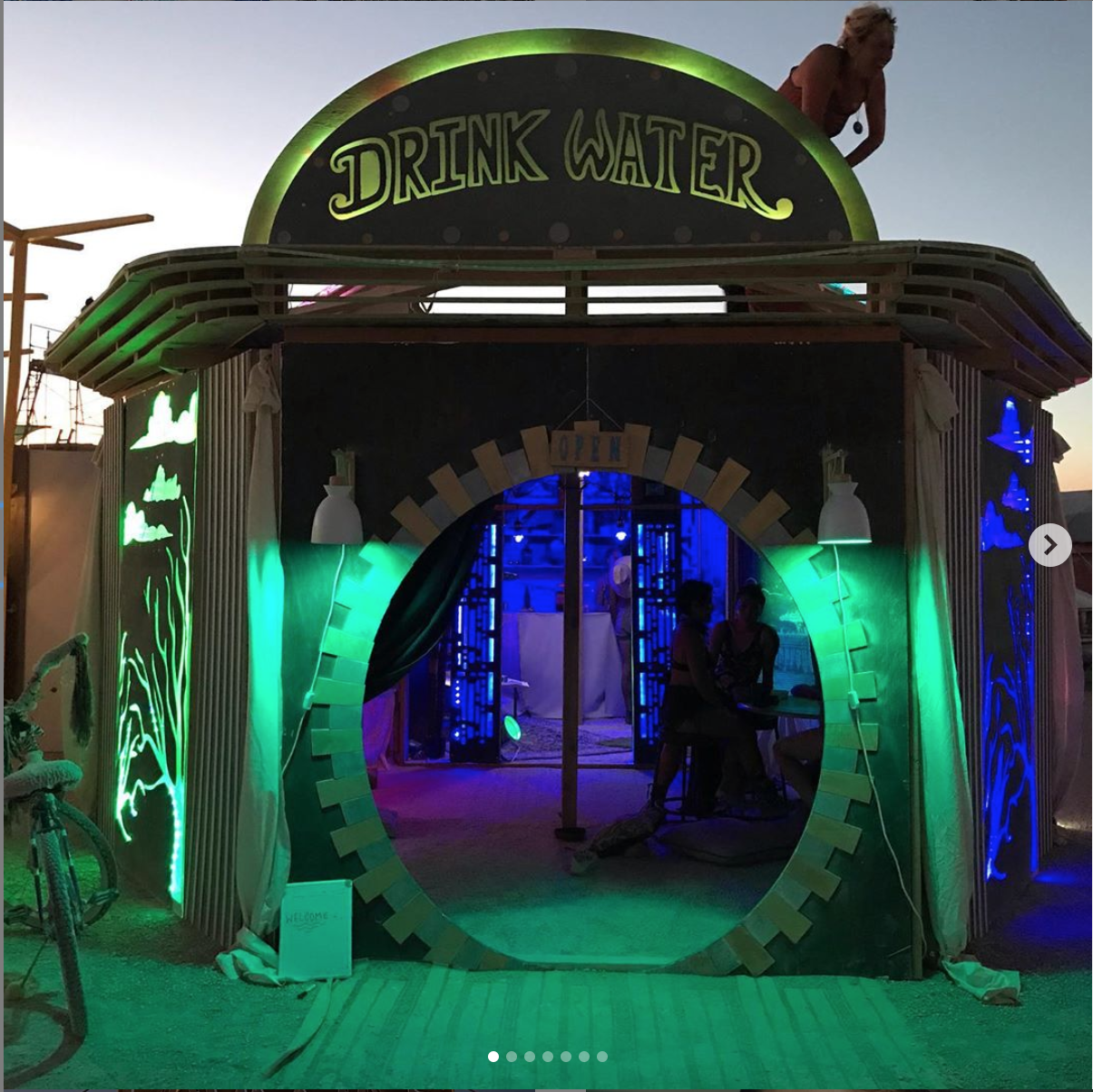 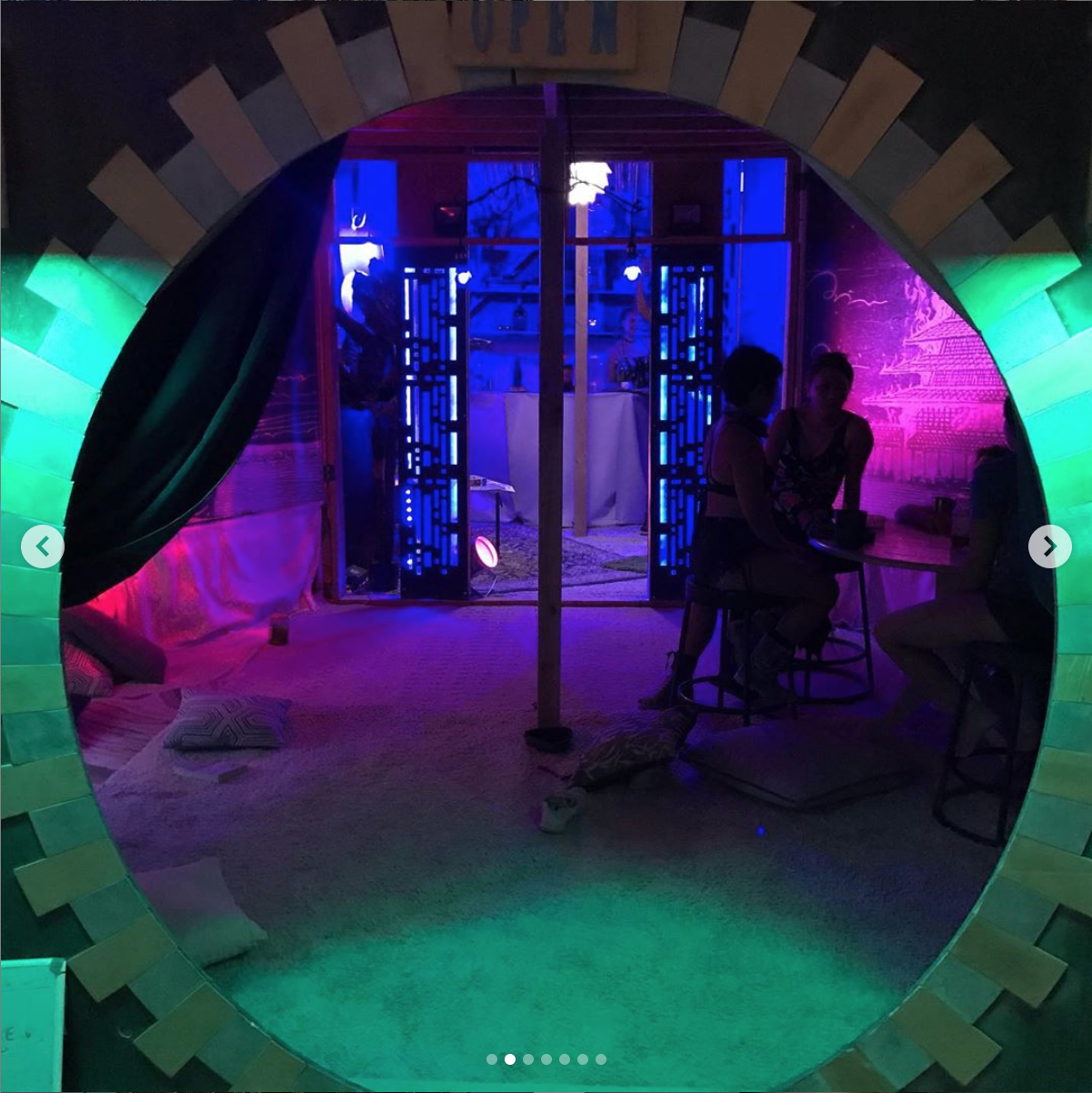 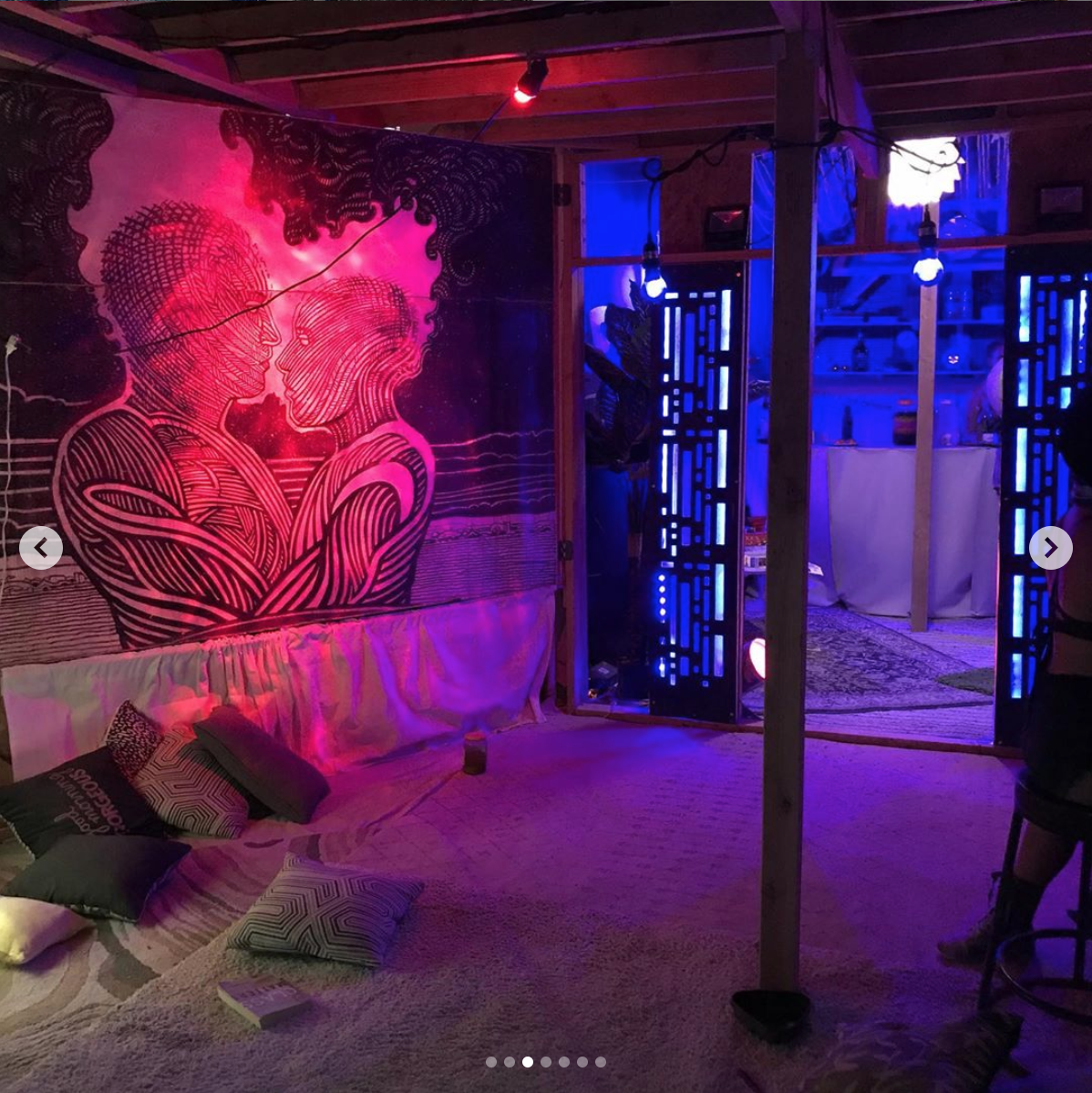 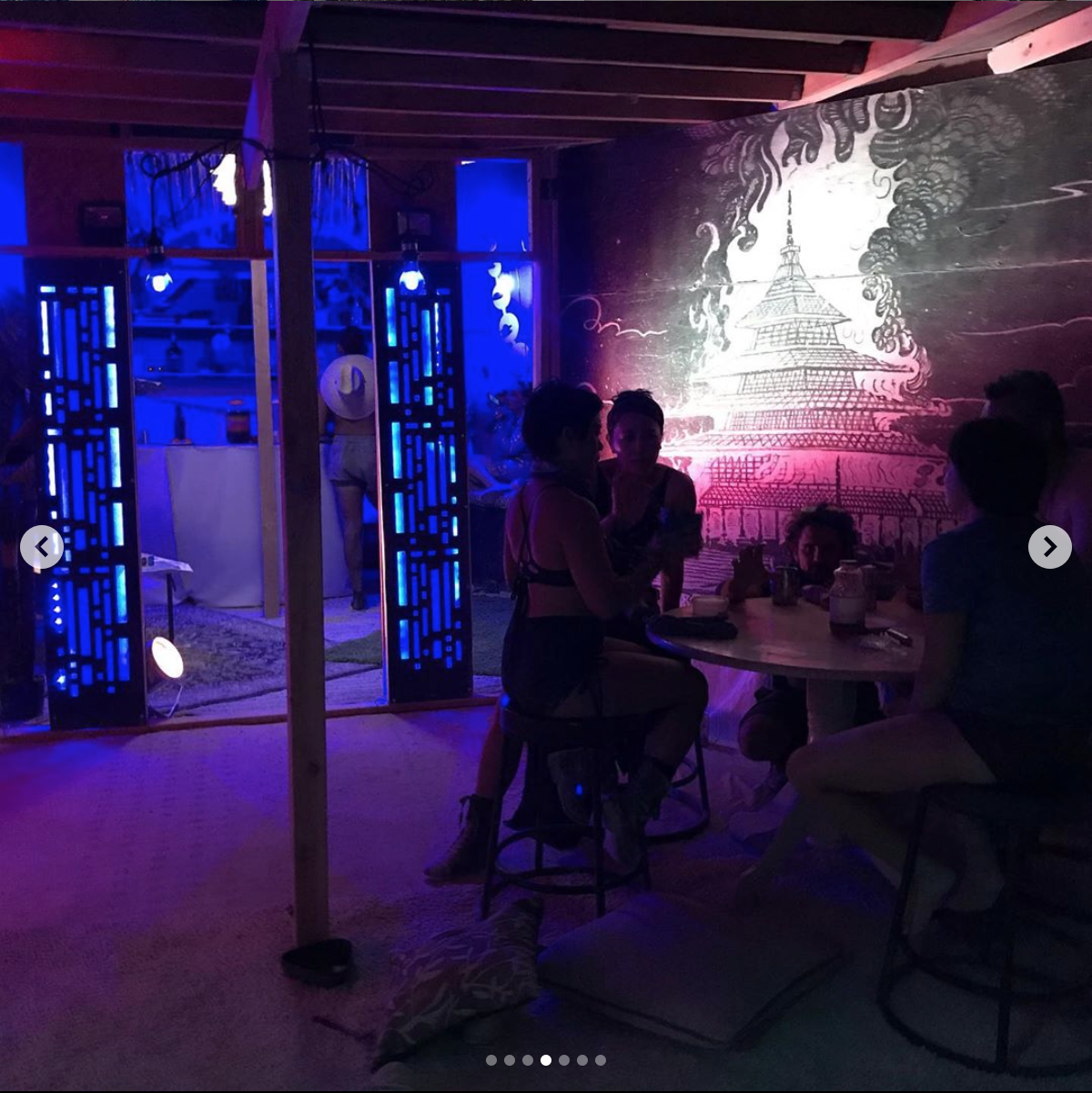 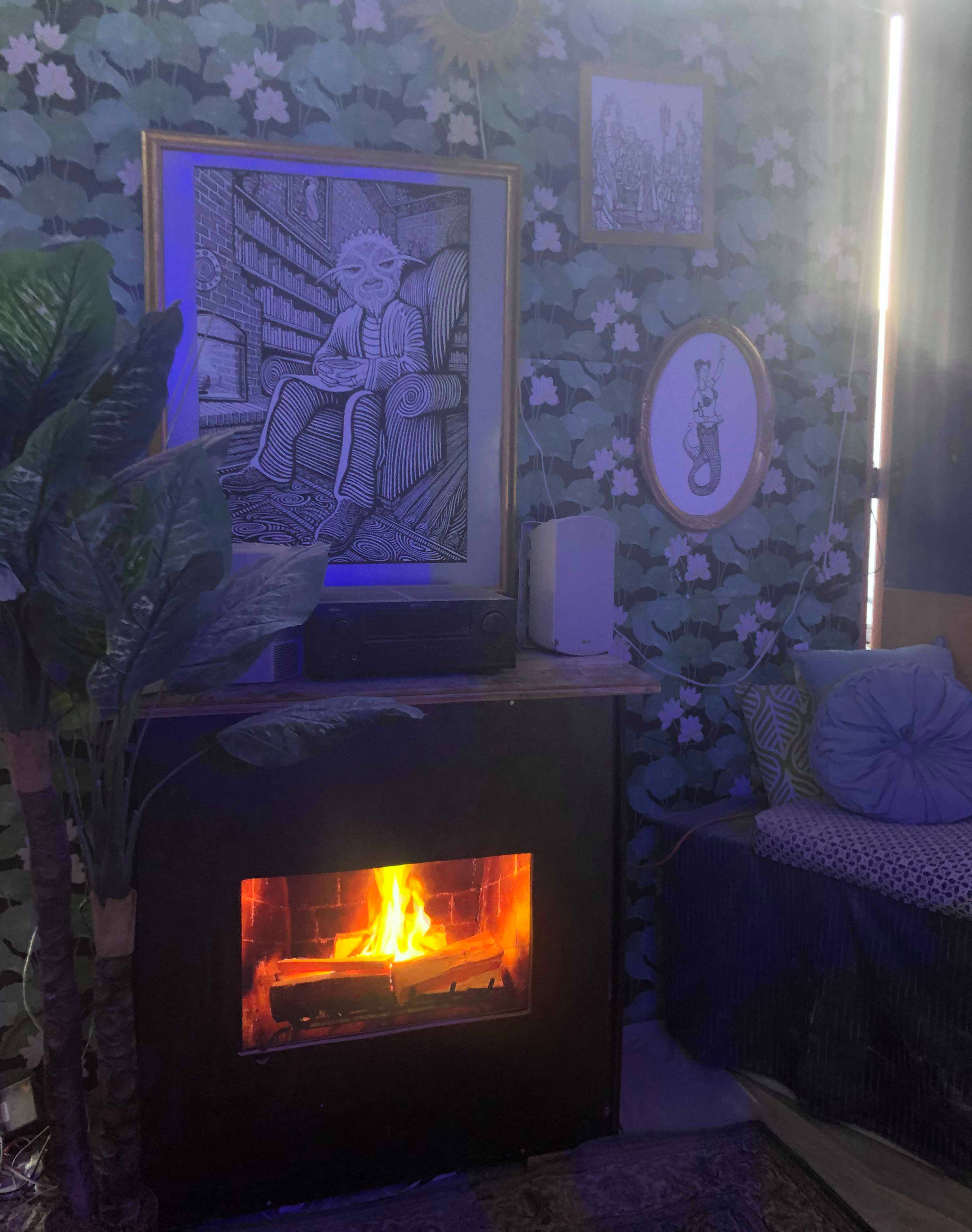 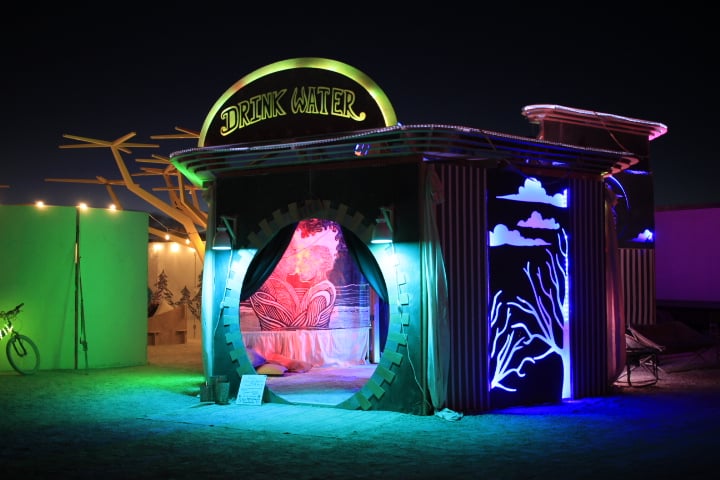 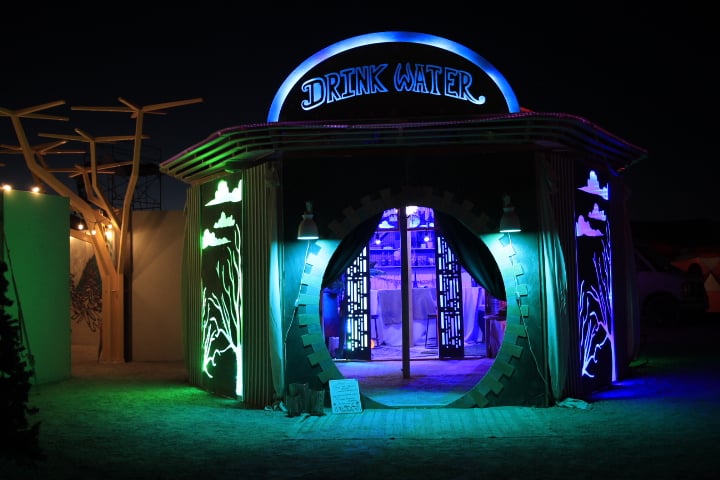 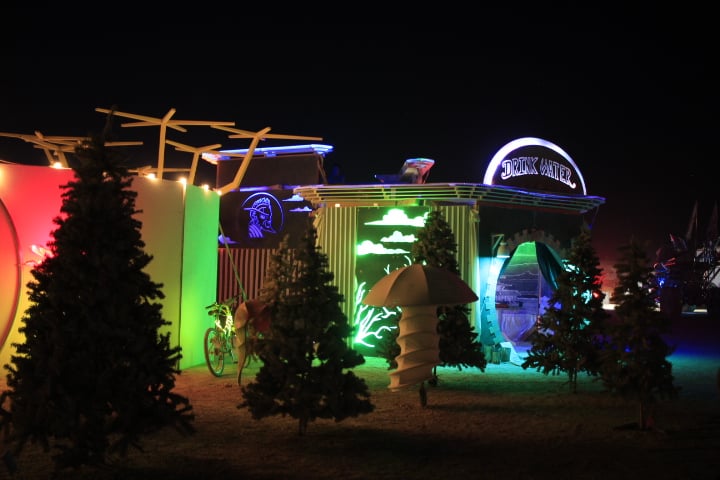 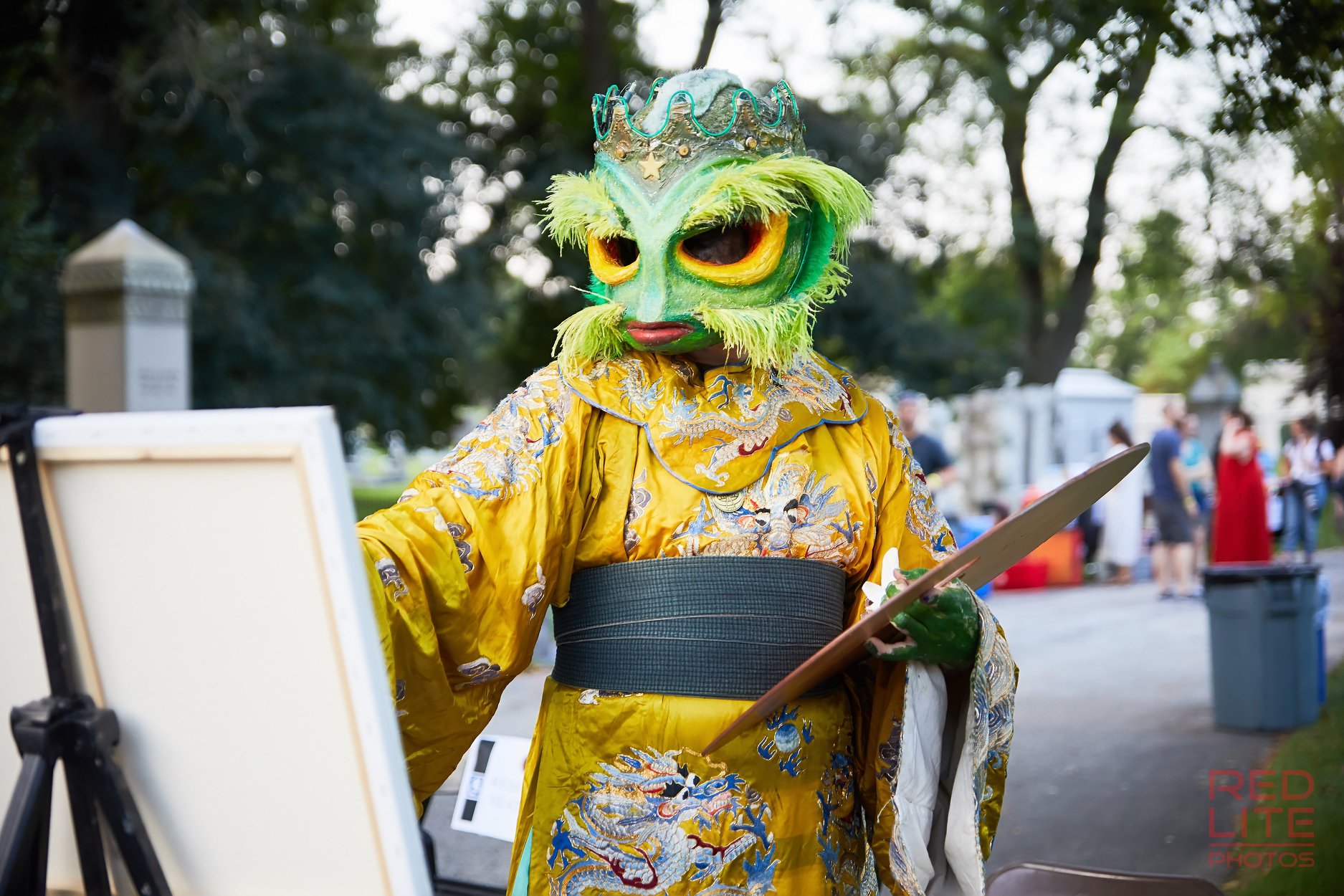 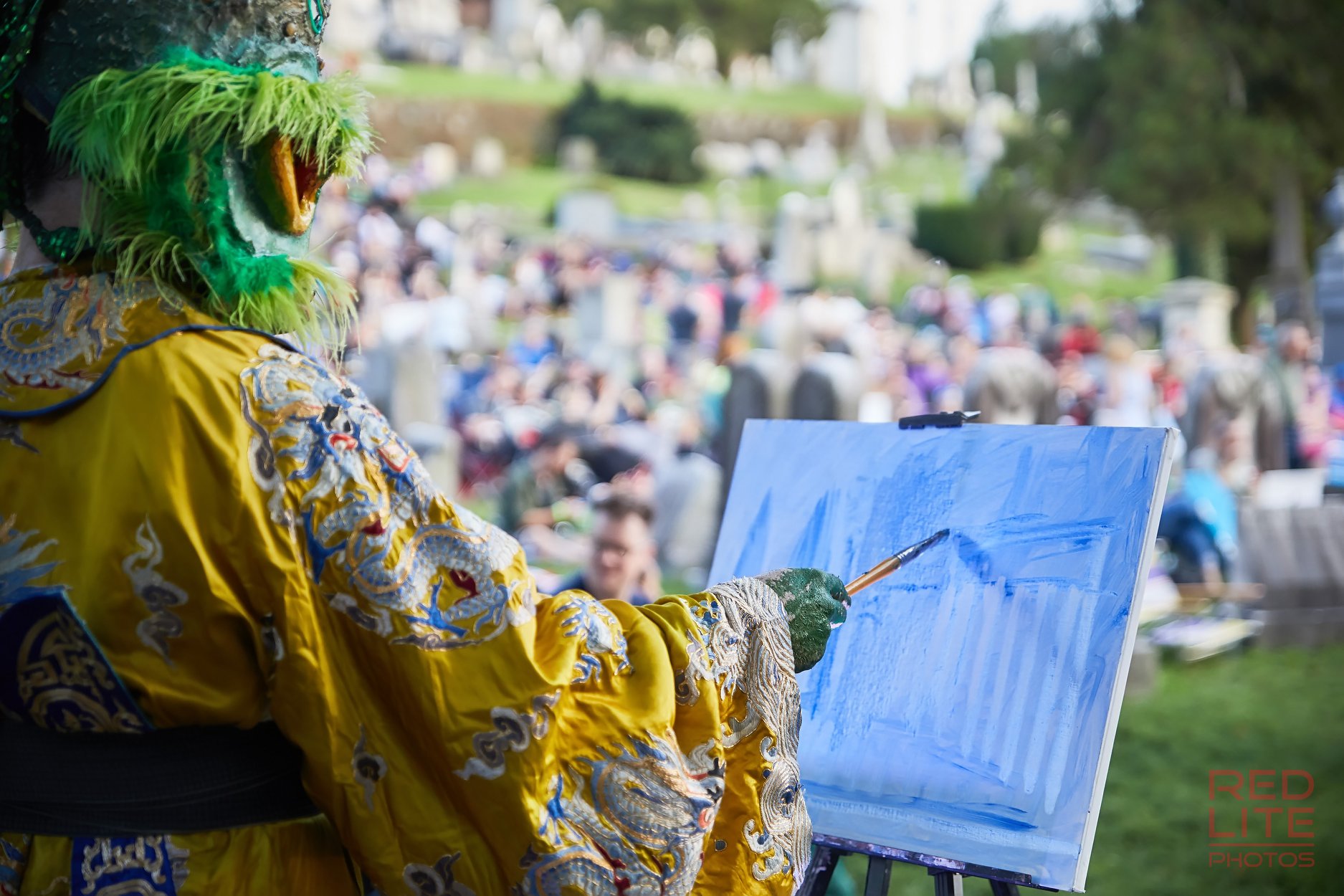 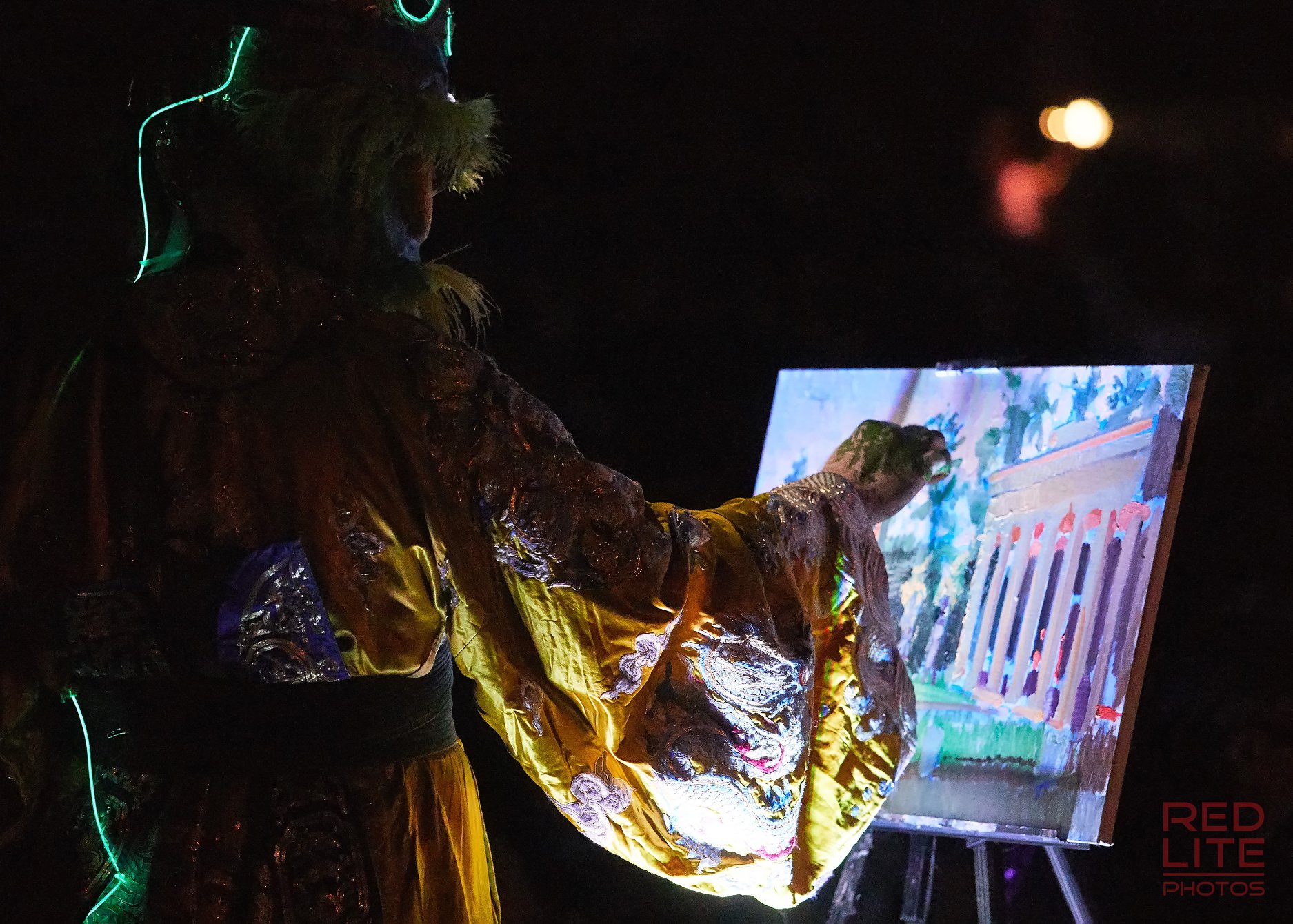 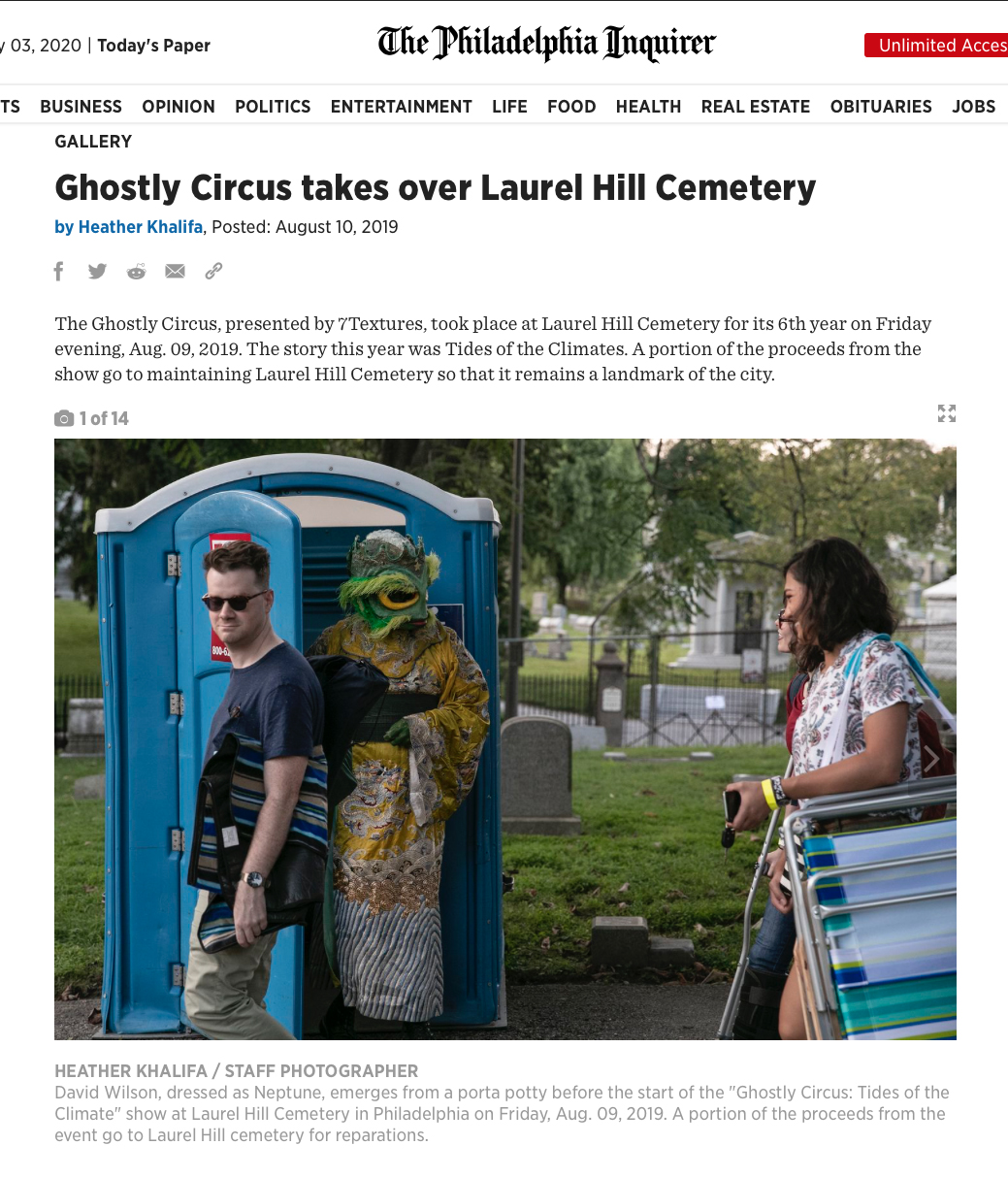 Some early Drink Water! sketches and character designs from way back in November, 2001. This story was brewing in my sketchbook for about 13 years before the work really started on the webcomic in the Fall of 2012. 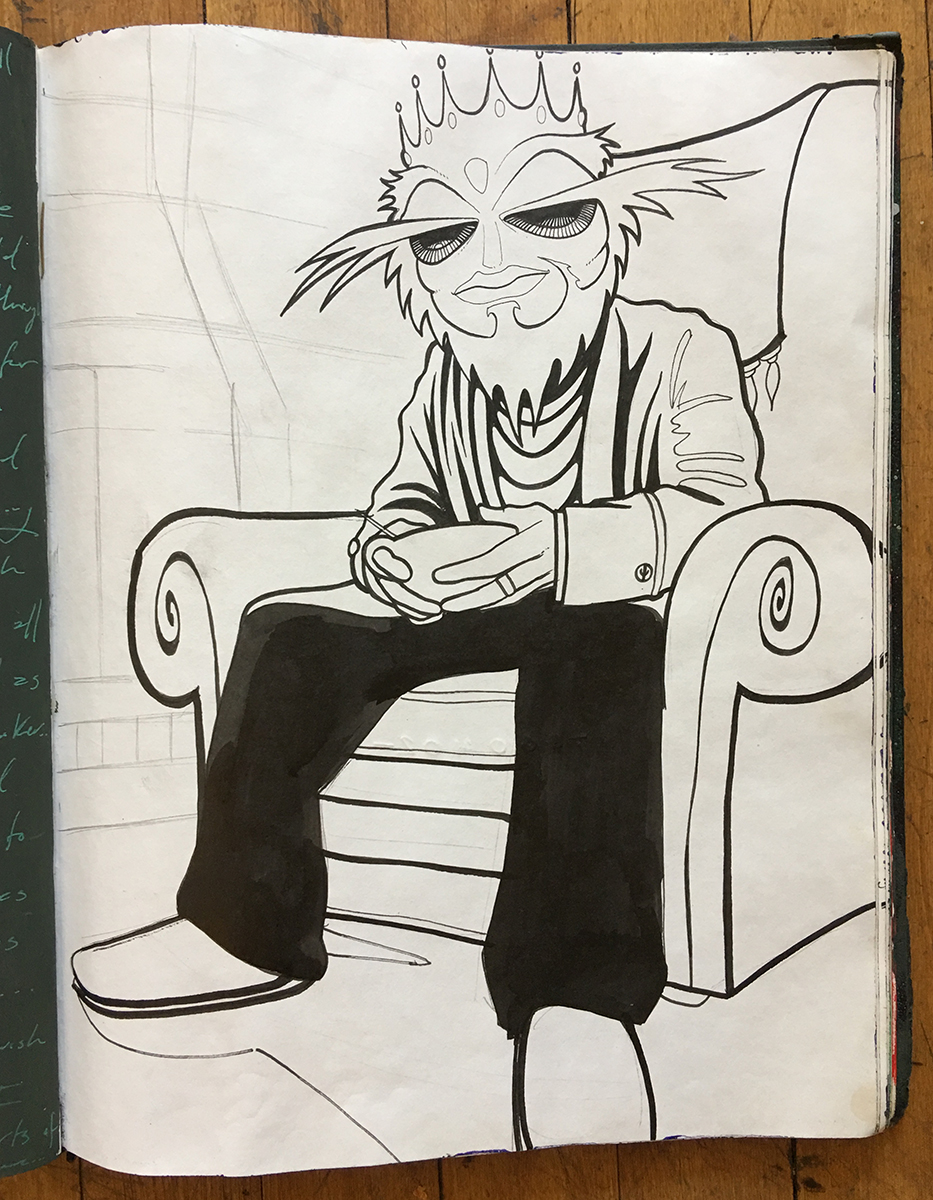 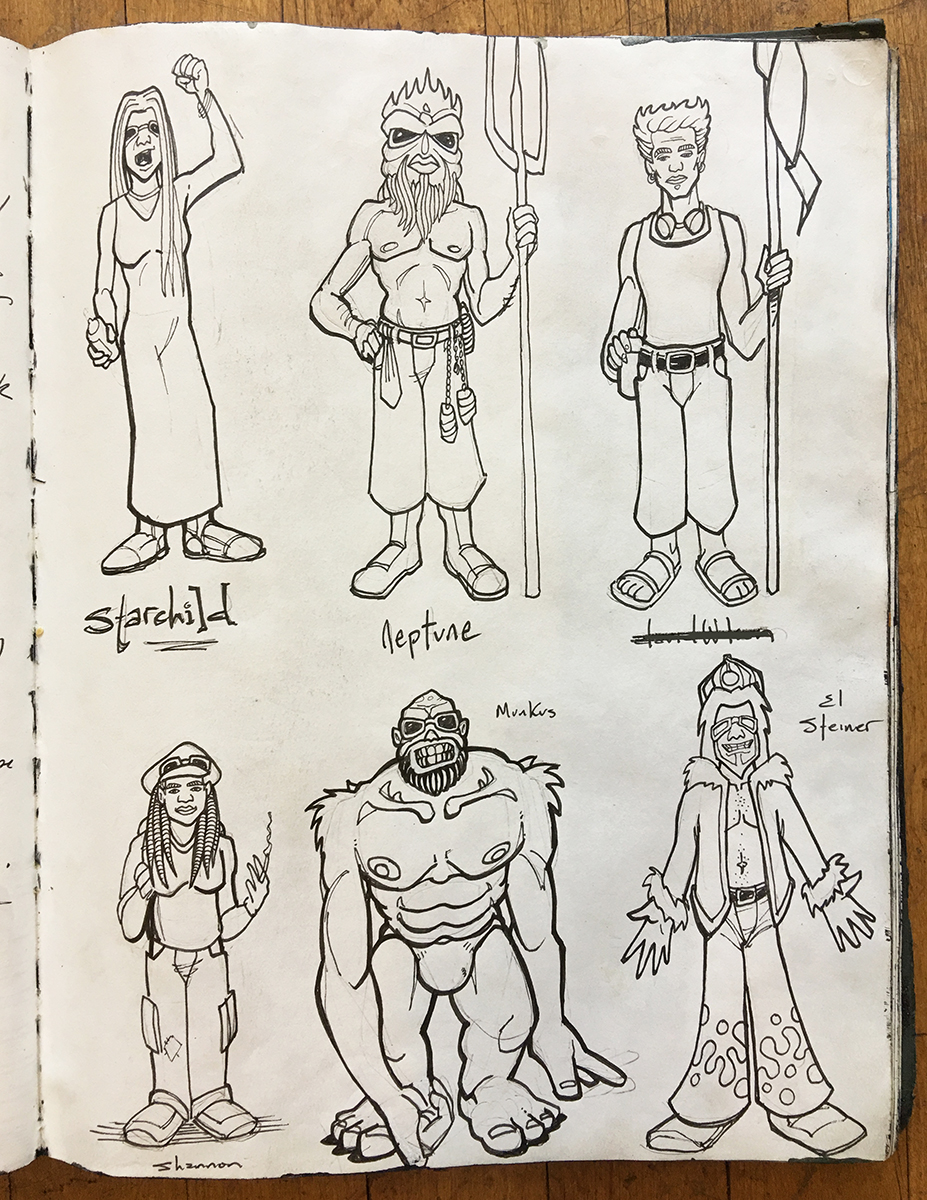 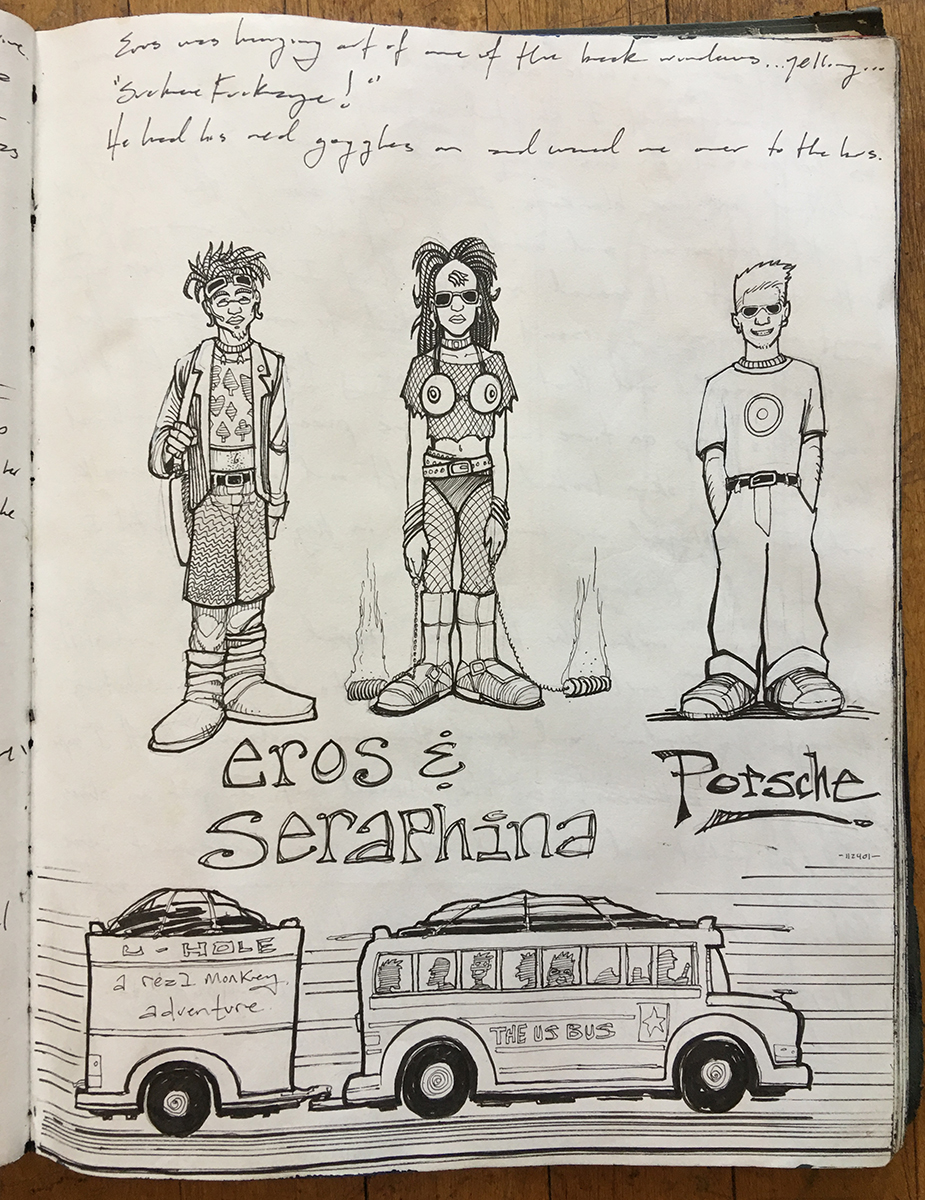 Here’s a little sneak peek behind the scenes into the making of Drink Water! This picture shows Chapter 10 in progress, as it currently hangs on my studio wall (Catwalk included for scale). Chapter 10 chronicles Munki’s mission to enter the Mud-Wrestling Tournament Supreme at the Netherworld Ranch in an attempt to claim the Devil’s boon and restore his lost soul. This is a true story from Black Rock City 2001.

I generally layout about a dozen pages at a time in pencil, and then gradually finish them in ink over the weeks that follow. Once the inks are done, the pages are scanned, and then finished digitally in Photoshop. This batch is about be taken down to make room for the next set of layouts, the end of Chapter 10 and into 11. Things are going to get pretty crazy as our story moves into Wednesday evening, so stay tuned! There’s a lot more to come . . . )'( . . . 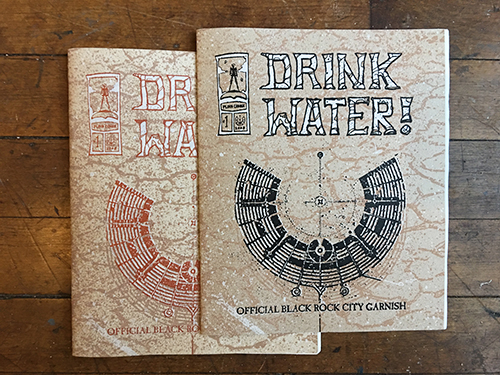 This is a limited edition Drink Water! print comic that was made as a playa gift for Burning Man 2008. The story is basically a first draft of Book #2 (Wednesday), and is functioning as a loose outline for the current webcomics. The Mud-Wrestling match is the first story in this print edition but it’s much shorter, only three pages long (the current webcomic version of the Mud-Wrestling match is up to 32 pages and counting!) There were just 250 copies printed and distributed around BRC that year, so unfortunately they are all long gone out into the world. Although things are currently brewing behind the scenes, so stay tuned for info about new print editions coming soon!

Greetings from the Netherworld Ranch 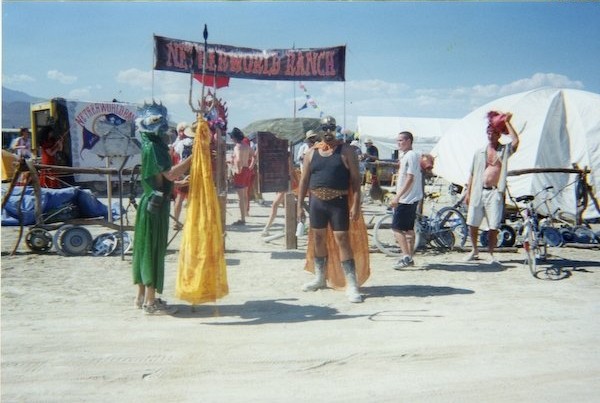 Here we are 200 episodes and six years into our story and still a long way to go. We are currently in Chapter Ten, Book #2, about midway through Wednesday afternoon. We have an action-packed evening ahead of us featuring battling dragons, flaming stilt soccer, and a visit to the Thuderdome! All this and more coming up, so stay tuned!

This photo was taken in Black Rock City back in 2001, and features Munkus and Neptune standing outside the Netherworld Ranch about to enter the Mud-Wrestling Tournament Supreme. Another piece of evidence from the archive proving once again that all of this is based upon true events, and I am endeavoring (to the best of my recollection) to bring you these stories as they actually transpired.

Thanks again for following along with our story, and stay tuned for many more adventures in 2019!